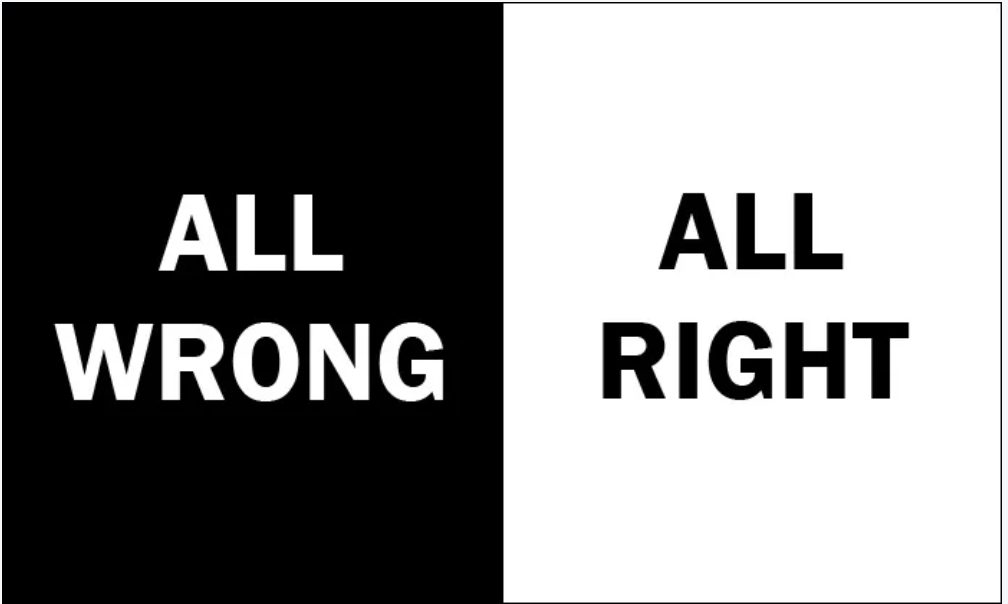 Most people, 99% of the time, are stuck on the systemic judgment level… where everything has an opposite, and it is either one or the other.
Binary thinking. What is Binary Thinking? Binary thinking, also known as dichotomous thinking, happens when even complex concepts, ideas, and problems are overly simplified into being one side or another. The gray area in the middle is ignored or goes unnoticed. Binary thinking helps us feel a sense of certainty.
Another way of looking: reality is 3d… Your thinking is binary… No match. No astuteness. No correct actions possible.

I used to live there in the binary. In fact every young child lives there… It is the under 3’s whole world… Binary.

But I was already an adult… And yet… I was utterly miserable… I was like an automaton… Kill it/love it, no in between.
Until 1998…
I was 51 years old when I saw it. Then a 15 year long process to get out of it…

It began with the idea of things are on a continuum… Not on a binary switch.

One of my Landmark coaches said about herself: Who I am is fully expressed greatness… And I heard the continuum for the first time.

I am not either great or sh!t… I can be great, even very great, and yet express just a little bit in one situation, and a whole lot more in others.

I can always look where I am at, in any given moment and say: OK… I am here… And be well. Strive to express more… But be really OK being exactly where you are at.

It didn’t turn on the capacity, because I already had the capacity… But I was almost 50 when this happened… And before that I had nothing between the two extremes… I was either great or not great. Either smart or stupid. Either accepted or not. Either respected or not. And the same about everyone else.

I could not see gradation and therefore I could not even look to see what made me express greatness less, be less smart, be less accepted, be less respected, etc. Because that didn’t exist for me.
And you can’t be responsible for what you can’t see… Not possible.
So that was the first turnaround for me.

The sentence: If it is to be, it is up to me suddenly made sense. Suddenly I saw no situation where I had no power… I always had some power, more or less, to influence the outcome.

Upon looking at this capacity I get a surprise: muscletest says: everyone has this capacity… And yet only about 1% of the time is it used… Is it seen… the rest of the time people just stay in the binary realm.

I watched this video with Alex Hormozi: he sees it as the number one reason people cannot move forward, people cannot use coaching to grow… Because even after showing it, they insist on the binary.