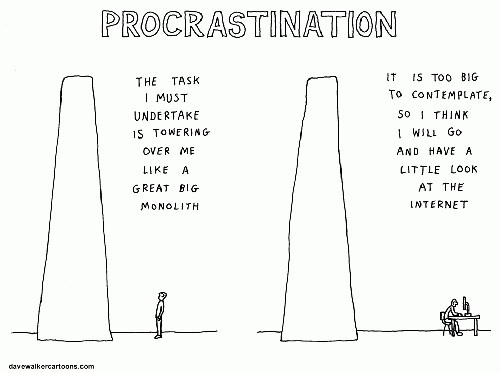 Finally, an almost magical cure for procrastination
When you have something to do but you don’t do it, your life starts going in a tail-spin, heading towards the rocks. It seems that what there is to do is so terrifying, so painful, so unbearable, that even ending up on the rocks is better.

If you are a procrastinator, your motive power is to avoid death, instead of loving life.

When you actually do the stuff you’ve been putting off, it always turns out that it is not that horrible. And, although you would think that next time it will be easier, you’ll find out that next time it’s even harder, even though you’ll remember that it wasn’t a big deal.

Why is that? It’s a vibrational issue. You’ve gone over to the side of Death…

It is much like being cold, trying to stay warm, trying to pull every energy inwards, and not move. Counter productive, counter intuitive, and yet, we all do it, in one area or another.

Just like to ward off the cold moving your muscles works, you warm yourself up, and the issue disappear, in the case of a procrastination, with the feared item, feared issue, feared opponent, taking action will disappear the issue… but the inner logic is set wrong, and somehow only an emergency, a direct threat to your life can flip it, throw the switch for you, and you seem to have no power, you wait until the threat is big enough.