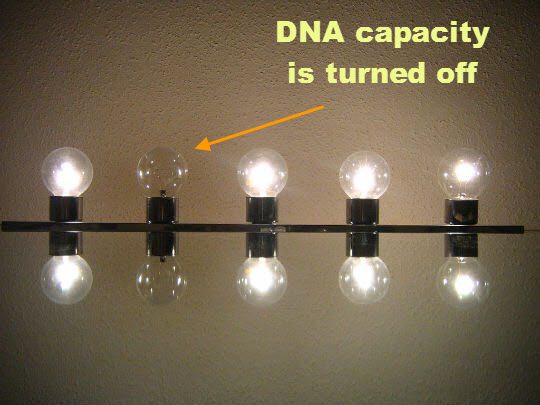 The Human DNA is like a Christmas tree
It has lots of light on, the active genes, and even more lights off, the inactive genes.

A light on is a human capacity that is active. It signifies that the organism considers it worthwhile and needed to keep it on… because it produces a benefit commensurate with the energy expenditure the body needs to put out to keep it on.

A light off is a human capacity that is not active.

One of these capacities, or genes in this case is the entitlement gene. This gene allows the child to be taken care of, instead of resisting it or working against the caretakers. This gene, when it stays on beyond age 3 wreaks havoc…

It keeps a person from seeing what is theirs to do. and it makes them have their hands out for alms all their lives.
The Law of Attraction and other religions preys on these people.
But how do these genes turn on, and why isn’t everybody the same on the level of DNA?

When I came to America, I spent all my money… it wasn’t much anyway. Eventually I made a habit of asking myself every time I wanted to buy something: do you want it or do you need it?

It was hard to tell. I wanted most things and therefore I felt I needed them.

Forrest Gump wore braces and didn’t know he could walk without them. But when the bullies were chasing him, he ran, first with the braces, and then the braces fell away. He never stopped, he won races, he just ran.

That was a new capacity for him. He ran for his life…

There is a difference between the chaser and the chased, the fox ad the rabbit. The rabbit runs for its life, the fox runs for his dinner… and there are other rabbits…

But it takes a person with a desire burning enough to create a do or die promise. It is not a dime a dozen: in
.
Continue on https://www.yourvibration.com/20063/dna-activation-2/