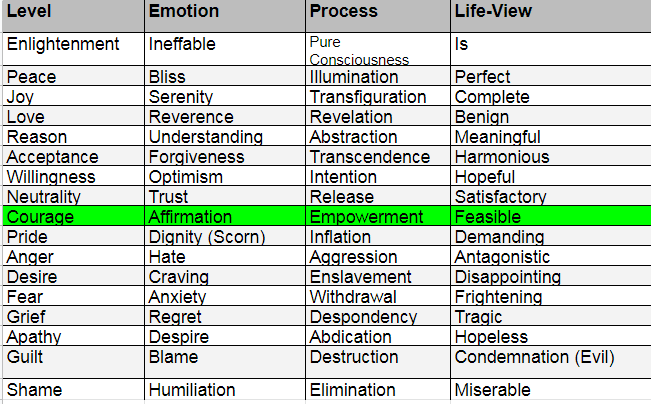 When you look at the consciousness level chart, as much as I don’t like David Hawkins, he is right about some things… And dead wrong about many others.

In raising your consciousness, the highest and ultimate target is what is called ‘enlightenment’ which doesn’t mean anything. So instead of enlightenment, in the work I do with clients and students, I endeavor to take them to the next evolutionary level, which is human being… So we’ll call our call: human being, or fulfilling the Original Design encoded in the DNA.

It is not easy to notice, because it is hidden in a top right corner of the chart… but if you look and set your life at the furthest and highest consciousness, you’ll notice that it says: no emotion… and life occurs, on that level as it is what it is. Not how it should be, not how it shouldn’t be, not right, not wrong, not sad, not happy, not good, not bad… it is what it is.

This is a recent video by a dude, British accent… but it is OK… I have never made a video on releasing… maybe I should.

In the same chart he is absolutely and totally wrong about ‘ineffable’… an ecstatic state that is incompatible with enlightenment.

On that level, and that is what you should work towards, the mission is: the emotional state of no emotions. Feelings? yes. but emotions? driven by words? no. None.

How do I know?
I have been climbing the consciousness level scale for a few decades now. And the things have changed for me are this:

1. I am seeing a bigger picture from a higher elevation where I am hardly touched by its mood…

Imagine a scenario: it’s a major intersection, and two vehicles collide. You are standing on the street corner… No compare the feeling you have when you look at it from an airplane… no sound, no gore, no emotion.

That is one of the big changes when you climb the Tree of Life, or the consciousness level scale

2. the second element, or the second change is how reality occurs… If you remember, how we look at reality is that we commingle it with what we say… and that commingled reality: what is happening plus what we say about it is our personal reality.

When you climb higher on the consciousness scale, you say less and less about what you see… so your personal reality and reality are more alike… As a result you are more astute, because all the emotions that distort your view come from the words. All of them.

So in essence, these are the two differences in experience between low vibration and high vibration.
From how high you look at things from… so they don’t threaten you
.
Continue on https://www.yourvibration.com/66556/levels-consciousness/