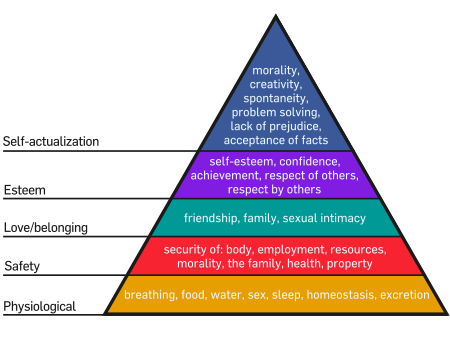 I have been observing people for about 23 years. Before that I had my head up my arse… and I wouldn’t have seen anything had I looked: I was so busy trying to get to a place where I can stand on my two feet and look.

In essence I was busy in the lower regions of Maslow’s hierarchy.

The capacities that were included in the DNA upgrade were all the two highest level of Maslow’s hierarchy, the levels anyone only pursues when their lower needs are taken care of, although it is not as cut and dry as that, some people will resign to a lower level of existence and give up pursuing their lower priority needs, so they can give their lives to something bigger… but the majority of people behave consistent with Maslow’s theory.

Since the article about the 19%-81% yesterday, I get worried emails asking me if they have the new DNA, or if not, if they are ready to get it.