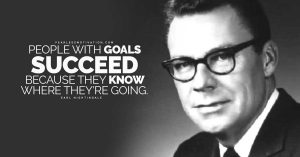 The Strangest Secret in the World
by Earl Nightingale

We produce here the full transcript of the famous speech titled “The Strangest Secret by Earl Nightingale”. This transcript is without the long intro by Diana Nightingale, widow of Earl Nightingale. We hope that you get inspired by his wisdom and insights.
Opposite of courage in our society is not cowardice. It is conformity.
MP3 Audio: listen or download

I’d like to tell you about the strangest secret in the world.

Not long ago, Albert Schweitzer, the great Doctor and Nobel Prize winner was being interviewed in London and a reporter asked him, “Doctor, what’s wrong with men today?”

The great doctor was silent a moment, and then he said, Men simply don’t think!

And it’s about this that I want to talk with you.

We live today in a golden age. This is an era that man has looked forward, dreamed of, and worked toward for thousands of years. But since it’s here, we pretty well take it for granted.

We in America are particularly fortunate to live in the richest land that ever existed on the face of the earth – a land of abundant opportunity for everyone.

But do you know what happens?

If you asked any one of these men if he wanted to be a success, he’d tell you that he did, and you’d notice that he was eager toward life; that there was a certain sparkle to his eye, an erectness to his carriage, and life seemed like a pretty interesting adventure to him.

But by the time they’re 65, one will be rich. Four will be financially independent, five will still be working, 54 will be broke.

WHY DO SO MANY FAIL?

What has happened to the sparkle that was there when they were 25? What’s become of the dreams, the hopes, the plans? And why is there such a large disparity between what these men intended to do, and what they actually accomplished?

Rollo May, the distinguished psychiatrist wrote a wonderful book called “Man’s Search for Himself.” In this book, he says the opposite of courage in our society is not cowardice. It is conformity.

And there you have the trouble today. It’s conformity – people acting like everyone else without knowing why, without knowing where they’re going
.
Continue on https://www.yourvibration.com/strangest-secret-world-full-transcript/