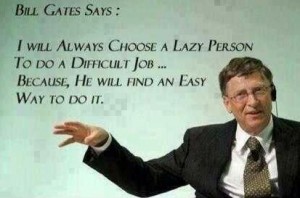 Is there a lazy way to heaven? Will my activators take you there?

First we must agree on what we’ll call lazy…

At the Budapest University of Technology I had a Math professor who started his first class asking who was the laziest person in the class. I raised my hand, in spite of the fact that you could have argued that I was the most diligent, the most industrious person you have ever known. But I considered myself lazy, and so I raised my hand.

He looked up through his inch-thick spectacles and said: ‘You’ll be the best in this class…’ and he was right. I was the best, but why? I surely could not be the smartest?

He explained that a lazy person looks before he leaps. A lazy person looks at the whole process they consider doing on paper and evaluate it ahead of time. Much like a chess master seeing how the game unfolds.

But there is a pesky barrier that you want to go around, and unless you learn how to go around that barrier, your perception is not from reality, but form the past, from memory. From Tree of Knowledge.

We also call these filters, but it has been useless… the word “filters” has also been contaminated. So we’ll call these barriers instead… you’ll see that I have, again, selected the shrewd and astute way to cut through the crap, and not lead you astray.

The author of the barrier is the mind… or we should say that the mind is OK, the mind is doing what the mind is supposed to do. The barrier really comes from you honoring the mind as a valued advisor, as a loving guide, as a parent, a master, a guru, a god.

In the previous article I have taught you the three basic steps of getting out of the mind. If you haven’t read it, read it now. It is the shrewd thing to do.

In transformational programs, especially in introductions where the whole purpose is to part you from your money, they show how it’s done, going around the barrier.

One of the most famous one is this, the famous tennis ball exercise of Werner Erhard

The leader asks the audience if there are any clumsy people there. A few hands go up. The leader selects one, preferably a woman who looks intelligent, educated, and competent.

He asks the woman on stage. Audience claps.

The leader says that they are going to play a game of catch. The ball is a tennis ball… nothing special. The leader throws the ball, the woman tries to catch it, but she shows signs of clumsy. If she doesn’t, the leader asks for a new test subject who is really clumsy.

This goes for a while, throw… no catch.

Then the leader changes the game: no need to catch, just watch which direction the ball is spinning. To make it easier on the eye, the leader uses a thick marker to mark the seams of the ball.

The leader throws the ball, the participant lets it drop but shows the leader which way the ball was spinning. She goes to the corner of the room to fetch the ball, throws it back to the leader. This goes on for a few minutes, then, all of a sudden, the woman reaches out
.
Continue on https://www.yourvibration.com/6854/lazy/